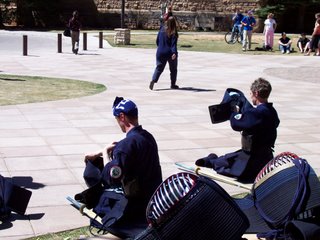 A few kenshi, including me (behind the camera) demonstrating the wonders of Kendo to the passing masses on Prexy's Pasture in front of the University of Wyoming's Union. Most of them just gave us wierd looks, and a newspaper quoted someone saying the craziest thing they've ever seen is ninjas on campus. Hmmm... I like the idea of ninjas but the traditional ideas, not the modern trying to take the name of ninja or ninjitsu. Oi, go bujutsu, go ninjitsu.
at April 30, 2006
Email ThisBlogThis!Share to TwitterShare to FacebookShare to Pinterest

blah. here i am an addict blog reader and this is the best you can do for me?