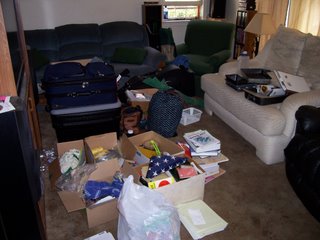 Almost a hundred different computers have visited me according to my counter. That doesn't mean a hundred people, I might be responsible for five or six of those computers. I hope I didn't scare off any of those people regularly reading my nonexistent blog because I didn't write for a while.

What can you do, though? I am just about to move to a new house which should be interesting considering it's a basement but near the theater and a park, pretty good huh? Maybe I'll start running in the mornings again because of closeness of grass. Concrete and asphalt are horrible surfaces to run on, but grass is much more forgiving even if it is uneven. Although, thinking about it, maybe I shouldn't run. I think I have done something to my foot during kendo. Rather than having problems with my right foot from fumi-kumi-ashi, stomping on an attack, my left foot has a pain between the third and fourth meta-tarsals where there is a nerve that dives between those bones according to people I have talked to. It may just need rest but it may need a shot of cortizone(sp?) or removal, not the foot, the nerve. Fun!

The other day I got a call from the oral surgeon's office asking if I could come in the next day for consultation and... SURGERY... Well I tried to scrape up a few people to look after me after surgery so that I wouldn't do something stupid like drown in a thimble full of water. My family is currently out of cheyenne on the annual family trip somewhere, of course I am too old to go with them it seems (something about making money) anymore and I guess it's okay but they don't know that I almost went into surgery. I am sure my mom will throw a coniption even though I didn't do it. I will probably have to wait several months before getting the surgery done. Although I figure that while I am on the last year of my parents' insurance, is there anything else I need done? My foot? I don't know of much else, also I want to be in perfect health before traveling abroad, otherwise I might be in trouble money-wise. How many surgeries are too many within a few months? I really don't want to find out.

It is hard cleaning out a room I have become ensconsed in. It seems almost as familiar as my family's house but I will be glad to get away from the ill-done and ill-kept bathroom. I don't mean ill-done as in decoration, ha, who cares? Except that it has carpet, old brown, and well, stinky. The wall paper isn't much better and all three of the drains in there including the toilet are always on the brink of blocking up. The sink drains slowly and it's sort of disgusting. I should take care of some of this but... I am moving and I have caused very little of the problem so I will clean out my room with minimal trace left that I was there and then I am no more. Of course I will from time-to-time visit but my staying days are over.

Now for something different:
What are men but lost and confused?
What does anyone want?
To be happy, and in happy be content with this short ephemeral existence.
Make an impact how you will.
Bring on the fires of hell, I will fight.
Bring knowledge and wisdom, I will learn.
Bring peace and security, I will enforce.
But most of all bring freedom, I will enjoy and defend.

I don't know if I can take my own advice on the learning bit, nearly burned myself a few minutes ago. In my defense I had an oven mitt on but I had to grab the heating element which I must say burns through much more quickly, literally, than a metal pan. I had to clean up the smoking stuff in a heating oven. Learn from me, don't be stupid. Fortunately I move fast, no harm done.

Much said, now mute.
at August 14, 2006
Email ThisBlogThis!Share to TwitterShare to FacebookShare to Pinterest

it's the japanese words to the Tean Titans theme song.

I just skimmed your post and got a bit of an idea of what your issue may be. I had an issue on my calves which was effecting my left leg including my knee.

Apparently it was just a soleus muscle that was overused and I needed to stretch it and do physio. THe stretch I did which I do from time to time is on a set of stairs I do the Achilles stretch but the leg that I am stretching I dip my heel down below the stairs. This helps to stretch other muscles in particular the soleus. If not go to a physio therapist which is good, don't do surgery they are only after money.