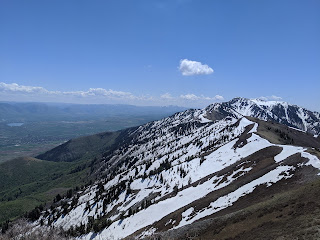 I think I broke my step counter. We had a few hikes that added up over the days to over 30k steps in a day and another day that was over 28k. Other days were over 15k pretty easily. Now that I look at it though, my adjustable step goal is just over 10k. Spot on for some questionable science.

That might seem reasonable, except that all through the pandemic I have consistently not even come close to that goal. Some days were below 3k. My body really suffered for it because I was always on edge in terms of not wanting to let my team down. As I have discussed before though: The only way to take care of others well is to (often) take care of yourself first.

There are deep philosophical discussions to be had behind this idea, but I will give two short caveats and an illustration: Never moving beyond yourself is just narcissism, and sometimes it is necessary to sacrifice many things in order to care for or protect someone.

So back to too much work, essentially health might seem to be tangentially or maybe unrelated to how one works, but if you have ever been sick, hungry, or worried you know that it is hard to concentrate on a task-at-hand that won't alleviate the distraction. Physical health is the same, preventive maintenance means you will reduce the chance of dysfunction.

So I need more steps and I need more exercise. I am looking forward to starting my new Job on Monday. With everything new there is always apprehension, but I think this will be that much better.

My brother-in-law is married off, it was a good wedding. We took some time after and hiked and birded Utah and Idaho, that's where all the extra steps came from.

Also, why is it already summer? It is already too warm, and I need to plant beans, tomatoes, and peppers.